Please browse the embedded version of the report below (best viewed in fullscreen) or fill in the form on the right to download a PDF version.

Ever since the late 1960s, funds of hedge funds (FoHFs) have played a prominent role in the development and evolution of the hedge fund world. Indeed, over the following 40 years, the managers of managers running commingled FoHFs had become arguably the single most important type of allocator to hedge funds – contributing close to 50% of all hedge fund assets just prior to the global financial crisis of 2008.

Since 2008, however, the picture has changed markedly. While hedge fund assets overall rebounded strongly and surged on to new highs, the traditional funds of funds did not – with their assets continuing to languish at or around the same levels.

Nevertheless, multi-managers today still allocate roughly 20-25% of industry assets – at $600 billion or so, it is still a far from insignificant sum. That said, a decreasing proportion of it is in traditional commingled funds (FoHFs), and ever more is in other types of multi-manager vehicles such as customised, bespoke or advisory mandates, sometimes via managed accounts or so-called ‘funds of one’ set up for specific clients only.

In the intervening years since 2008, the whole business model of the traditional FoHF has come increasingly under scrutiny. This has been for various of reasons – from events like the exposure a small minority had to Bernie Madoff’s fraud; to whether it is still feasible to charge an extra layer of fees in an era of persistent low interest rates and lower potential returns.

With returns from underlying hedge funds seen as increasingly disappointing in recent years, particularly in 2016, these pointed questions have arguably become ever more acute, leading some to see it as an existential crisis for FoHFs if not the whole multi-manager sector.

In this environment, it is not surprising there has been a continuing trend towards more consolidation – with a succession of mergers and acquisitions. There has also been increasing talk that only by being ‘specialists’ in certain niche areas can multi-managers survive – in contrast with the traditional ‘generalist’ FoHF which consciously seeks to diversify risk and sources of return by allocating all across the strategy range.

Nevertheless, despite what some increasingly see as this existential challenge, the sector persists – and clearly still plays an important role in the life of the industry, not least in identifying and nurturing new and emerging talent.

With the help of important support from our partners at BNP Paribas Securities Services, we were able to bring together for this roundtable an impressive group of prominent players in the business. They talked in compelling ways about why the sector is still so important to investors – and the significant role it can still play in the hedge fund world. We hope you find this resulting report interesting and illuminating. 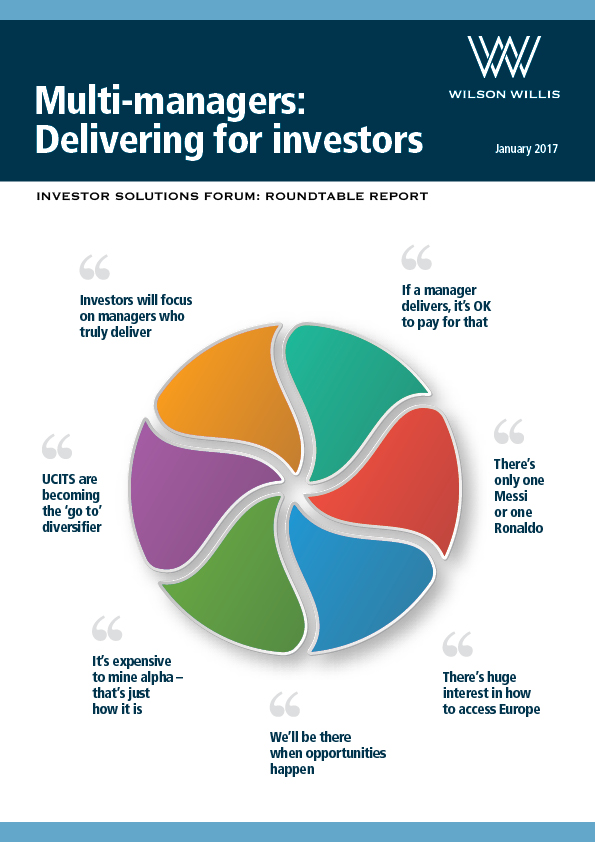 Please complete the form below and a link to download the report will be sent to your email address.